Approaching a birth chart without an accurate birth time can be a stumbling block for both clients and astrologers alike.
For the client, they might be wondering what astrology can offer when you don’t have a known birth time.
For the astrologer, this means you need to use different tools in your astrological kit. This is no different to relying on your favourite knives in your kitchen when preparing a meal. When they aren’t available, sometimes reaching for a different knife can be sharper and more effective than you remembered.

This article is geared toward some of the ways in which I approach a chart when I don’t have a birth time. 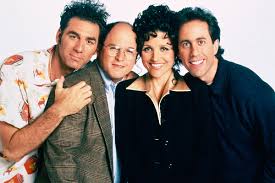 I recently had a few people tell me that I’d probably enjoy “Comedian’s in Cars Getting Coffee,” on Netflix, as they knew of my love for the show Seinfeld.

I don’t know whether it’s because I spent my teenage years watching Seinfeld and then enjoying the re-runs well into my 20’s or not, but I think there is a Seinfeld moment in every day. Occasionally, I’ll break out a Seinfeld line, but alas, not everyone gets the joke. If you’re curious about what some of these jokes might be or, would like a trip down memory lane, then check this out

Now in my 40’s and watching Jerry on TV again, now in his 60’s, my admiration for him continues. I always enjoy that his comedy isn’t low brow and reliant on the overuse of profanity, but rather exaggerated observations on life and human behaviour.

In Comedian’s in Cars Getting Coffee, Jerry invites a comedian friend (sometimes even former Presidents) out to coffee and picks them up in a rare or flashy car that reflects the personality of said friend. The show is based on the in-car and coffee shop conversations that ensue.

While watching the show one Friday evening, I couldn’t help but notice how the show symbolises the current transit of Uranus in Taurus.

Each episode begins in predictable Taurus fashion, with a car engine revving as he calls, not texts, his friend to invite them out for coffee. He doesn’t meet them at the designated place, he collects them in a specifically chosen car. He’s embodying the radical act of showing up and being present in the moment.
There is food, an abundance of coffee and conversation, but most importantly, in real life connection.

So, what does an astrologer do?

My memory told me he was a Taurus, but I also remembered his birthday falls in April. I had to be sure. A quick Google search gave me the following data.

Without a birth time, there are few factors to consider before moving forward.

– We don’t know the ascending sign, so we can’t make house-based delineations as we don’t know what planets rule what houses and in which houses they reside
– We need to ascertain the Moon’s movement on the day of birth and weather it changed signs or not
– You may need to place heightened emphasis on the lunar phase, rather than the Moon sign
– Focus on what you do know about the chart and the information it presents, rather than what you don’t know and what ‘could be.’

It’s that last part that can be a grappling point, especially for newer astrologers keen to get everything right. Transiting Pluto conjunct Venus for instance, will likely be obvious to the client once you’ve explained a range of potential outcomes and how they might feel. Let your client fill in the gaps, ‘oh yeah, the drama and politics at work has been intense so far this year.’ From that, you’ve got an idea that this rare transit is playing out at work rather than within a romantic relationship.

When it comes to charts without a timed birth, I place the Sun close to the ascendant with a time around sunrise. From there, I read the chart a little bit like a solar horoscope while keeping the above-mentioned points in mind.

Jerry’s Sun at 8 degrees of Taurus. Given that the show is based on luxury cars, coffee, food, conversation and spending time together in real life, it’s no surprise that Jerry has created a series based on all the little luxuries that Venus-ruled Taurus adores!

His Venus at 00’ Gemini demonstrates his primary method of connection is through conversation, banter and the exchange of ideas.
Together with Jupiter at 24’ Gemini, Jerry has both benefics co-present in the curious and communicative sign. Occupying the same sign also makes it difficult to determine which planet may be the more benefic of the two from a sect perspective. Jupiter tends to be more benevolent in a day chart, whereas Venus has a little more to offer to those born at night.

His natal Mars forms an exact sextile to Saturn in Scorpio, also creating a mutual reception. Mars and Saturn receive each other into rulership. Mars being exalted in Capricorn gives the duo extra power.
As with the benefics, the malefics forming an alliance with one another don’t tend to lean in a obvious direction in helping determining whether he may have been born by day or night.

If you’re consulting with a client who has experienced their first Saturn return, asking them about their general experience between the ages of approximately 29 – 32 can be helpful in determining sect and which planets may be more helpful and those that could be a hinderance for your client.
Positive experience? Mostly likely born by day, with the Sun above the ascendant / descendant axis.
Negative or challenging experiences? Probably born by night, with the Sun under the horizon.

According to Wikipedia, Jerry was 27 when he made his first appearance on the Late Night Show with Johnny Carson. Thus, providing a breakthrough which then led to several segments with David Letterman which led to other projects, that led to what eventually became Seinfeld in 1988, when Jerry was 34. Jerry’s Saturn return laid the foundation that set him up for the rest of his life.

Overall, this stretch of time was hugely successful for Jerry as Saturn’s return also activated the natal Sun / Saturn opposition. By the time Saturn left Scorpio for Sagittarius, Pluto arrived at 8 degrees of Scorpio, opposing Jerry’s Sun, and his identity became forever changed.
The story could have been different. The Saturn return could have brought the end to something he associated with his identity, such as his career, a relationship or the loss of a loved one. If that was the narrative, we could assume a night birth.

The Sun in Taurus forms a tight, yet separating trine to Mars in Capricorn and opposes Saturn in Scorpio.
The Sun / Mars trine across enduring and stabilising earth signs, brings a continuity to Jerry’s identity and expression which we can see demonstrated by him always being himself. Seinfeld being Seinfeld, being on stage as a stand-up comedian or driving his friends around in cars getting coffee, Jerry is always being Jerry, rather than performing as someone else.

Mars in Capricorn brings driven ambition and the willingness to do the work in order to bring a plan or project to completion. Mars in Capricorn thrives at being at the top of their game, and with the show Seinfeld celebrating its 30 year anniversary this year, his career is still going strong and still all centred on him – the Sun – as Jerry Seinfeld.

I can’t remember which, but in an episode of Comedians in Cars Getting Coffee, it was noted how well Jerry had aged. He joked about how he’s never had to work. While that’s not completely true, he has obtained huge Capricorn style status by just being himself! An exalted Mars forming a trine to the Sun is going to bring a sense of ease and exaggeration with seemingly minimal effort.

As Mars looks to Saturn for support, in Scorpio, we see a deep and probing quality. One of my favourite Scorpio phrases ‘still waters run deep,’ would apply here. Jerry specialises the genre of observational comedy. The ability to observe and probe into what makes people tick is quintessential of the sign of Scorpio.

With the Sun in opposition to Saturn, it can be about the ability to see both sides of the proverbial coin at the same time. To be outside oneself (Sun / Saturn) observe the behaviours of people and everyday life and make a joke about it, is the lynchpin of Jerry’s identity.

We also have to consider the Moon in Pisces. On the day of this birth, the Moon ranged from 16 degrees Pisces, through to 1 Aries. The Moon changed signs at 10:09pm on the evening of his birth. While it’s possible he has the Moon in Aries, it’s probable the Moon was still in Pisces.

Regardless of the Moon’s degree (let’s assume it is in Pisces) it makes a whole sign sextile to the Sun in Taurus, a square to Venus and Jupiter in Gemini, a trine to Uranus, a trine to Saturn and a sextile to Mars and no Ptolemaic aspects to Mercury, Pluto or Neptune.
From an aspectual perspective, the Moon is quite influential in Jerry’s chart. With so many aspects, it’s difficult to ascertain the tightest and most important aspects.

For the most part, I’d keep delineations of the Moon, minimal. Whether it’s in Pisces or Aries, it will still aspect its respective rulers (Jupiter or Mars via a square) so I’d be more likely to describe the phase, which is toward the end of the third quarter and close to moving into the balsamic phase. On the day of Jerry’s birth, the Moon was travelling quite fast, so I’d personally err toward the balsamic.

Jerry’s style of humour has a dry quality to it, but at the same time, can be kind of moreish. So, while the Sun, Mars and Saturn do bring an emphasis of dryness, the heat is modified by the coolness of the earth element of Taurus and Capricorn and Saturn is also cold. The sign Scorpio adds a dose of moisture that tempers the dryness, albeit only slightly.

With the Sun in Taurus, who looks to Venus for input, and by default of Jupiter’s co-presence in Gemini, we get a decent dose of moisture to help lubricate the dryness. While Jerry does have a dry personality, there is enough warmth and moisture to enhance his overall likeability.
This is one of the reasons Venus and Jupiter enjoy benefic status due to their moderate warmth and moisture, providing ideal conditions for growth.

The Moon, most likely in Jupiter-ruled Pisces, just adds to the growth and benevolence factor. If the Moon was in Aries, there’d be more heat and dryness. Either way, it wouldn’t much effect the overall temperament.

Using these primary planets, we can see that Jerry’s overall temperament (exclusive of the unknown ascending sign) is most likely Melancholic/Sanguine type, which is not uncommon among comedians.

This temperament combines the opposing qualities of being social and likeable while being a little standoffish at the same time.
The ability to oscillate between these extreme temperament models may work in Jerry’s favour in the sense he can relate to varying viewpoints. While he might not be an actively social person, he shows a genuine interest in others, which makes for great interview skills demonstrated in Comedians in Cars Getting Coffee.
His sociable quality can help him gain new insights and perspectives, while at the same time remains enduring and timeless.